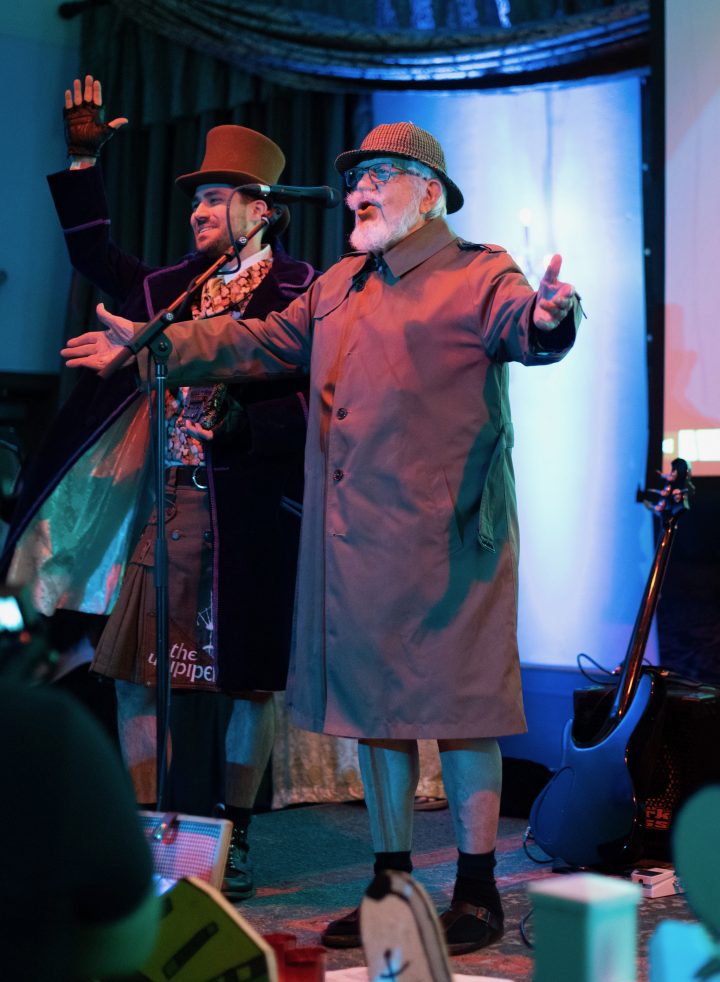 On May 16th, 1984 Portland received a wake up call. A career politician was voted out of office, and a breath of fresh air waltzed onto the city stage. Well, actually… he canoed his way up to the shore of the Willamette River to make a statement, things were about to change. Business as usual wasn’t working and the city needed something different. THIS mayor would be different.

A beloved business owner in the Goose Hollow neighborhood since the 1960’s, John Elwood Clark Jr was serious about politics without taking himself too seriously. His charming antics caught the world’s attention, and he helped shine a national spotlight on a city quickly becoming known for her quirky personality. Johnny Carson, The New York Times and others took notice; a mayor can wear rainbow-colored sandals with green suspenders and still work to solve homelessness. A mayor can ride his bicycle around town and yell, “Whoop, Whoop,” and still replenish the city’s depleted budget.

If being weird is simply being different, then being weird is a badge of honor. Our final Weird Hall of Fame inductee has made a lasting impact on our city. He ushered in a new era of productivity and individuality, and will forever be known for EXPOSING (wink) Portland to a new way of thinking. He’s a tavern owner, a newspaper founder, an ex-beatnik, a born again pagan, and our favorite politician… please join me in congratulating our very own, Mayor Bud Clark.

Few Portlanders are as dazzling as our next inductee. As polished and shining as she is, it’s important to remember… even the most brilliant diamonds go through tremendous pressure and intense circumstances in order to reach their full potential. Walter Cole’s life story is made for the movies; rags to riches, rejection to acceptance, discovering your true identity during radical social change. There’s Oscar-worthy buzz here, folks, and her story is still unfolding!

When did Walter Cole become Darcelle? One could easily pinpoint the moment in the late 1960’s when a glitzy new sign was hoisted up on the corner of Third and Davis. But a truly inspiring life story doesn’t come that easy. Darcelle was an idea that rested in dormancy for 37 years, through an era of horn-rimmed glasses, crewcuts and uniformity. What followed was an time of intense social change, when challenging societal norms and redefining the construct of family became the only way to survive the pain and suffering the AIDS crisis unleashed. Darcelle’s true brilliance began to shine as the fight for gay rights reached new heights, and her larger than life presence brought drag out of the closet, spilling into the streets.

Do you think 1960’s Walter Cole would recognize himself today? He’s the proud owner of the longest-running drag show on the west coast. He’s a Guiness Book of World Records holder as the oldest performing drag queen. He’s a Portland treasure and a national icon… what do you think Walter would say? “That’s no lady, that’s Darcelle!”

For many Portlanders, it’s difficult to cross the Hawthorne Bridge without being flooded with memories of our next inductee. With his radiant smile, his joyful music, and his colorful personality… “Working” Kirk Reeves became a permanent fixture in the weird Portland landscape for over a decade in the early 2000’s.

There’s no formula to achieving notoriety in Portland. It may take lots of work, a little luck, or perhaps just having the right connections. Kirk bought a trumpet at a garage sale and started taking lessons. In doing so, he realized his passion was in bringing joy to folks through entertainment. He pursued many genres of art: playing his trumpet all over town, writing novels, hosting a cable access show called Low Comedy, even performing magic for lucky kids who crossed his path.

Try to visualize this scene. You’re driving home from work one rainy afternoon, the light is low and the sky is dreary. You’re tired and all you can think about is getting home. But then you hear that bright tone of the trumpet washing over you, quietly at first, but gradually becoming more brilliant as you near the source. Somewhere over the Rainbow, Amazing Grace, the Star Wars theme, Kirk performed music he knew would resonate with his listeners. His music struck a chord with commuters, his authenticity was endearing, and his suffering was real.

When Kirk passed away, the community banded together in his memory. A candlelight vigil was held in his honor, documentaries have been made, and his smile continues to light up our mornings as we commute to work thanks to the mural on NE Grand and Lloyd. Kirk may not have achieved all he wanted to during his career, but he achieved greatness in our hearts – and a permanent place in the Weird Portland Hall of Fame. Cheers to “Working” Kirk Reeves.

Great stories often have inauspicious beginnings. That can be said about our first inductee to the Weird Portland Hall of Fame. Mr. Stewart Hollbrook was a 30-year-old ex-logger without a high school diploma when he found himself in Portland, in need of a new direction. Over the next 41 years Holbrook reinvented himself, becoming one of the most prominent literary voices to shine a spotlight on the pacific northwest. His writing and sense of humor were often compared to the likes of Will Rogers, Mark Twain and HL Mencken.

Holbrook became a person of note in Portland, not only for his writing, but for his colorful personality as well. He was a lively storyteller, he always sported a colorful and stylish wardrobe, and was always willing to engage in spirited debate with anyone… including the many celebrities from all over the US who made of point of visiting him. Holbrook entertained everyone from college presidents, Madison Avenue executives, Labor Union representatives, loggers and movie stars.

Holbrook’s extensive literary canon reflects his empathy for the underdog; the visionaries and fanatics of the Pacific Northwest. He had a profound interest in weird and wacky underbelly of Portland, and his greatest joy was in poking fun at stuffed-shirts and hypocrites from all walks of life. It is with great joy that we proclaim Stewart Holbrook as one of our most distinguished Portland Weirdos.